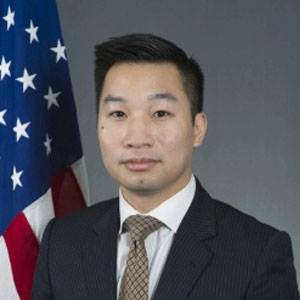 Alex Wong was Deputy Assistant Secretary of State for North Korea in the Bureau of East Asian and Pacific Affairs and dual-hatted as the Deputy Special Representative for North Korea from 2017 to 2021. Before taking on his duties related to North Korea, he oversaw regional and security affairs for the bureau, including the U.S. Indo-Pacific Strategy. Wong previously served as Foreign Policy Advisor and General Counsel to Senator Tom Cotton and served as the Foreign and Legal Policy Director for the Romney-Ryan 2012 presidential campaign. Wong clerked for The Honorable Janice Rogers Brown of the United States Court of Appeals for the District of Columbia Circuit. He received his J.D. from Harvard Law School where he was the Managing Editor of the Harvard Law Review and an editor of the Harvard International Law Journal.